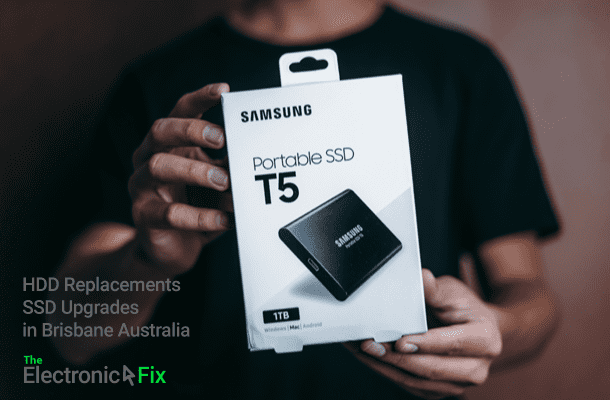 Solid-State Drives (SSD) may be all the rage for technology enthusiasts and gamers, but regular laptop users may not know the benefits of investing in one for upgrading their computers.

When considering to purchase, upgrade or swap a Hard Disk Drive (HDD) a great deal will depend on the scope of laptop usage. For example: if you mainly use the laptop for word documents, emailing, and basic internet browsing (or the occasional video streaming), then your laptop may still perform as required without an SSD upgrade.

Since most laptops do generally benefit from using solid state drives, today, we are going to inform our website visitors and valued customers here in Brisbane about replacing a HDD with a SSD.

Replacing laptop’s hard disk drive with an solid state drive is one of the best and most cost effective way to drastically improve laptop performance.

Basics of HDD versus SSD

A hard disk drive (HDD) is an older type of computer device storage device that uses metal platter with a magnetic coating and has moving read/write head to access data. A solid-state drive (SSD) is a newer and much faster (particularly its I/O capacity and Read/Write speed) type of storage device that stores data on instantly-accessible memory chips.

Since SSD has no moving parts its rather quite (great for those who usually use their laptops or desktop computers for extended periods of time because you won’t hear the annoying hissing noise (it will be similar to a scene from the movie A Quiet Place)).

Every laptop and computer device needs a storage device to install the operating system on. In recent years, most laptops and PCs only had an option to use HDD which stored data via spinning disks. The transducers on the hard drive write data onto the disks and it works very much like those old-school record players. The transducers move over where different data is stored on the disk in order to access it.

In general, hard disk drives have been around a long time and can still be useful if there is a lot of data that the user needs available on a regular basis. This can also be the case if a user is not willing to invest in an external hard drive to save all their data and the convenience of simply having it on the laptop one is using is also a factor.

A solid-state drive on the other hand have zero moving parts and instead rely on integrated circuits or flash chips. SSDs are firstly very compact in size, relatively affordable, and are extremely fast. SSDs operate at considerable advantages in comparison with HDDs mainly in the shortage of data access time as well as data safety. Solid-state drives are a more reliable storage option offering better data integrity.

At the end of the day, you can not compare the speed difference, because both drives are living in 2 different galaxies. If you enjoy activities like playing games, watching videos, operating data-intensive software, and don’t like waiting around, SSD means the startup of any program will be much, much faster reducing lag.

Today, there is even newer version of SSDs called M.2 SSD. M.2 improves on the mSATA standard using the PCI Express® layout and M.2 form-factor connectors. Most newer models of laptops come with multiple SSD slots including M.2 connector slot.

There is a considerable price difference for starters, however, in terms of performance they are both the same. If you are considering to purchase either one for replacing an old HDD, then, do so because it will be definitely much better. You’ll immediately see extreme performance gains when switching HDD to SSD.

However, let’s say your laptop is already using SSD but now you want to upgrade to M.2 SSD, you will not notice performance gains.

Yes, absolutely, not just because of having SSD slots but rather because of the motherboard with SSD connectors will 100% use newer technology. That means, future upgrade option for your laptop.

Can You Replace an SSD in a Laptop?

Yes, all types and model of laptops can replace or upgrade their Solid State Drives.

Can You Replace Laptop Hard Disk Drive with SSD?

Yes, we can take out any laptop HDD and install SSD (that means no more hard disk drives installed on your laptop computer) for fraction of cost of upgrading a HDD right here in Brisbane Queensland Australia.

Can We Swap HDD with an SSD in ANY Laptop or Desktop PC?

Yes, you can swap HDD and use SSD instead for laptops and desktop personal computers.

There are many different scenarios for changing HDD to SSD, and much depends on your current motherboard connectors. You may need to use adapter or converter cables. For example: USB 3.0 to SATA External Converter Adapter Cable Lead for 2.5" HDD SSD SATA III or USB 3.0 to 2.5′ 3.5′ Inch SATA HDD SSD SATA Adapter Hard Drive Cable.

Because SSDs can be installed in a PCI Express expansion slot, or used through USB or even be mounted directly on the motherboard. There are various ways to accomplish the SSD upgrade even if your laptop/desktop motherboard does not have any SSD specific connectors. 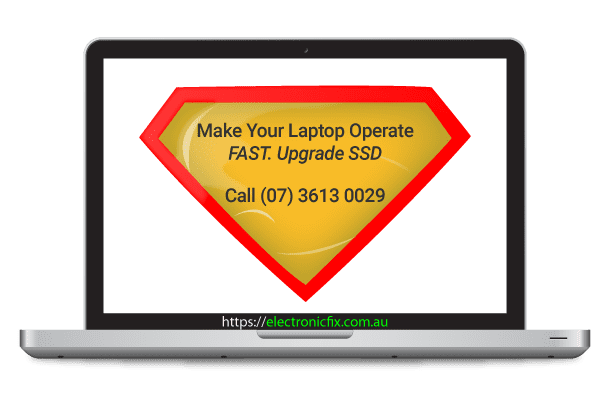 SSDs are The Future Now

There are many reasons why HDDs are more or less becoming obsolete just like CD or DVD (at least as the singular disk drive solution). Due to benefits and rise in popularity of SSDs, they can now be installed at a lower cost than when they first came out.

In fact, SSDs upgrade and replacement is a great investment when you want to resuscitate an aging laptop but don’t want to spend a fortune in doing so. An SSD installation will also leave space for a battery swap or other components to be added in.

Contact Us for Solid State Drive Upgrades in Brisbane